9 Inspiring Reasons To Be A Triathlete 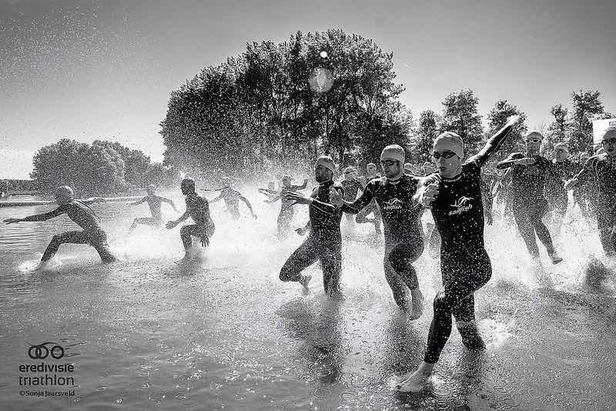 Whether you’re already a seasoned triathlete or you’re just thinking of having a go, here are some uplifting reasons to celebrate the sport…

Cycling, running and swimming events are all great, but there’s something inherently more exciting about a triathlon. Where else would you swim in the ocean among a thousand athletes as the sun rises over the horizon and a helicopter hovers overhead? Or race through a city-centre on closed roads at 30mph on a bike? Or run past cheering crowds and cheerleaders on a beachfront? These experiences are all part and parcel of some of the worlds best triathlons and they’re waiting for you to take part. Life is about enjoying special experiences – and triathlon gives you plenty of these.

After a few months of triathlon training you’ll start noticing a few gradual changes to your body. Triathletes often benefit from a swimmer’s upper body without the bulk, the toned legs of a cyclist and the slim stomach of a runner. Throw in a weekly strength and conditioning session and there’s no reason you can’t have great flexibility and core stability too. An hour of triathlon training typically burns 500-1000 calories, so providing you eat sensibly you should also shed some excess body fat. The best thing is that you’ll be so focussed on training for your upcoming races that you’ll get leaner and fitter without even thinking about it.

Doing the same thing everyday can soon get tedious, but that never happens with triathlon training. For a start there are three different disciplines (swim, bike and run), plus optional strength and conditioning workouts. And every tri-training session is different too. One day you’ll be swimming in a lake with friends, the next day you’ll be practicing tumble-turns in your local pool, then you’ll be riding hard efforts up a mountain or doing a nice steady run in the sunshine. There are speed-sessions, endurance sessions, tempo sessions and brick sessions in addition to all the technique elements you need to master. In short, every day is different and there’s always a new challenge to meet.

When you’re training for three different disciplines, there’s only so much of each one you can realistically fit into a week. For that reason, you tend not to get as many overuse injuries in triathlon as you might for single sports such as running. There’s a cross-training effect to triathlon, which means that fitness gains from one discipline contribute to another. So you can get to a fairly high level at say running or cycling from two or three workouts per week. And if ever you do get an injury you won’t feel as sad because you can usually carry on training in the other two sports.

Triathlon has a great social element to it. There are three sports to get stuck into and you’ll spend a lot of time training with different runners, cyclists, swimmers and triathletes. You’ll also make friends at races as you bump into the same people in all sorts of different locations. Racing triathlons around the country and abroad throws you into a situation of shared adversity where social bonds are formed. Triathlon is a great leveller too – it brings all walks of life together because all things are equal when you’re swimming, cycling and running.

The challenge of a triathlon can be a scary prospect but racing for charity can be an excellent incentive to train consistently and contribute to a good cause. The bigger triathlons in the UK such as London Triathlon, Blenheim Triathlon and Ironman 70.3 UK have charity places available for a range of organisations – the same applies around the world. The idea of you doing a triathlon might help entice friends, family and colleagues to cough up their hard-earned dough – and you normally get a free entry too.

Triathlon kit is cool. Your wetsuit will make you look like Batman or Catwoman (minus the cape) and that’s before you’ve even jumped on your bike. Imagine yourself on a sleek black triathlon machine with it’s carbon disk wheel humming along the tarmac.  You’re hunched down on your aero-bars, cutting through the breeze in your aero helmet, carbon cycling shoes and aerodynamic tri-suit. You throw off your bike shoes and slip on your lightweight running shoes with stretchy laces and your Oakley shades. Ok, so it’s not everyone’s idea of style, but it beats a string-vest or a pair of skimpy Speedos. Triathlon is a kit-lovers paradise.

Triathlon can take you to stunning venues you never dreamed of going to, but are always glad you did. Event organisers often hold their races in areas of interest or natural beauty, such as National Parks, city centres, stately homes, mountains, beaches and great lakes. Even if you stay in your own country, you’ll visit great places that you never knew were there.

There’s something about triathlon that encourages you to continually set new goals and work towards them. It’s a great feeling when you have ambitions and you gradually realise them. Triathlon can be a catalyst for changes in other aspects of your life too. If you’re constantly surrounded by high-achievers you might start to become one yourself. After all, as the saying goes: “success leaves clues”.

You’ll also find yourself thinking: “If I can do triathlons, what else can I do?”. It beats sitting on the sofa, watching TV and waiting for things to happen. Who knows, in a month’s time you could be treading-water in a lake, surrounded by hundreds of wetsuit-clad athletes awaiting the starting gun at your first triathlon.

Triathlons
Duathlons
Running
Cycling
Or subscribe & save! And swap freely between all 800+ plans...
Learn More
We're Sorry To See You Go!