How To Race a Triathlon in Hot Weather 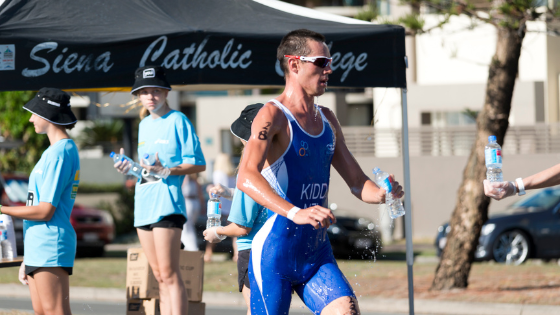 How To Race a Triathlon in Hot Weather

Learn how to survive hot weather during your next triathlon. With essential hacks on hydration, staying cool, plus training tips to help you race well in the heat.

Summertime means hot weather, and for many endurance athletes that can mean racing in difficult conditions. In hot weather, your body faces two challenges as you’re exercising: keeping you cool and keeping you moving. Racing in extreme heat never feels comfortable and even professionals struggle with it.

The two-time IRONMAN World Champion Chris McCormack used to wear the darkest Oakley sunglasses when he raced at Kona, Hawaii – simply to trick his mind into thinking it wasn’t so hot! Thankfully, there are several other things you can do to stay a little cooler.

Here are six tips to help you perform your best despite the heat.

1. Acclimatize by getting to the race venue early

Spending time in hot weather, helps you to acclimatize. The earlier you can get to your race destination, the more time you’ll have to soak up the conditions, and the better you’ll adapt to them.

According to one research paper “athletes can fully heat acclimate with 10 consecutive days of exercise for 90 minutes in 30°C (86F) wet-bulb globe temperature”.

Getting to your race venue early is not always feasible though, especially for amateur athletes. And even if you do, the temperature on race day could be significantly hotter than on the preceding days. But if you’re serious about a race, it’s certainly worth a shot. Even if it’s just two days early, it’ll still help.

Research has shown that just six days of hot water immersion (known as HWI) in a bath, can improve your 5km running performance in 30C (86F) heat by 4.9%.

To do this, you would need to exercise at a moderate intensity in comfortable conditions for six consecutive days, followed by a hot bath at 40C (104F) immersed up to the neck. Start with 15-minutes bathing on day one, and gradually build up to 40-minutes by day six.

And if you feel too hot or sick, get out and cool down. Sit for a few minutes until you recover. After six days of building up your tolerance, your body should find it easier to cope with hot race conditions.

Lowering your core body temperature before endurance exercise has been shown to delay fatigue in subsequent high temperatures. This can be achieved by pre-cooling, which is where you deliberately take steps to cool yourself down, before a race or key-workout.

There are several pre-cooling methods, such as ice-vests, ice-baths, and even crushed ice-slurry drinks. But you might have to ask yourself if they’re practical before a race.

According to one review study, “current evidence indicates cold water immersion may be the most effective method of pre-cooling to improve endurance performance in hot conditions, although practicality must be considered. Ice slurry ingestion appears to be the most promising practical alternative. Interestingly, cooling garments appear of limited efficacy, despite their frequent use.”

The ice slurry study cited in the review was done on pigs, and the drink was ingested at a -1 to 0C (30 to 32F) temperature. The same drink would probably cool-down humans too, but having one at the start of a race may not always be feasible.

As for ice baths, the temperature needs to be low enough and you need to be in long enough, for your core temperature to change. And there seems to be some debate about how exactly to achieve this. Even so, you may still consider trying it.

Ice garments, like ice vests primarily reduce your skin temperature, rather than your core temperature directly. But, this is said to result in a lower core temperature during exercise, due to increased core-to-skin heat loss. If you’re willing to give it a try, Nike make an ice vest. And you can find them on Amazon too.

If your race is due to be held in hot conditions and you’ve been living in a cold climate, you may need to re-calibrate your expectations. The chances are, your race time will be slower, compared to cooler conditions. If you set off too-fast, aiming to smash your PR, you’ll feel the effects of heat-stress sooner and more severely.

When racing in high temperatures it’s best not to fixate on a target time. Listen to your body instead. This can give you the best results in extreme conditions.

All the usual intensity measures like power, pace and heart-rate can be misleading when it’s really hot. Your heart-rate may drift up, as your heat-stress increases (known as cardiac drift). And your power output or pace may be significantly lower than normal.

Try setting yourself a target rate of perceived exertion (RPE) instead. This is a score out of 10 for the whole event. With 1 out of 10 being the easiest you can go, and 10 being the absolute hardest you can exercise.

For example, during an IRONMAN 70.3 in hot conditions you might aim for an RPE of 3 or 4. During the race, keep asking yourself “how hard is this pace feeling?”. And if the answer is 5 out of 10, then you probably need to slow down.

When racing in the heat, you’ll lose water through sweat as your body tries to cool down. Staying hydrated and fueled can be especially difficult, because your blood gets diverted to your skin (to stay cool) and your working muscles (to deliver energy). Instead of towards your gut. This is why people often feel sick or bloated during endurance events in hot weather.

The first thing to do is make sure you stay hydrated in the days leading up to the race. Drink plenty of water and avoid caffeine and alcohol, which can dehydrate you. On race day, start hydrating early and drink regularly throughout the race.

Some people believe that salt intake is important in order replace that lost through sweating. Most sports drinks contain some salt and if you want more, you can try salt tablets (such as those by Saltstick) to top yourself up.

I once interviewed Professor Tim Noakes (sports scientist and author of “Waterlogged”), who told me that athletes do NOT need to take on any extra salt, because the body already regulates it perfectly well. He also suggested you should drink to thirst, rather than to any pre-determined schedule.

Whatever you believe, the take home message is that you need to try different things, do your research and pick a fueling and hydration strategy that works for you. And then you must practice it in conditions that are similar to those of your race.

My final tip is not based on any evidence I’ve seen, but it works for me (and I hope it works for you too). Before a race hot weather, pre-soak your clothing in water (e.g. from a sink, bucket or bottle). The reason this helps, is because you’ll benefit from the cooling effects of evaporation, where the moisture on your clothing is turned back to vapor by the wind. You’ll feel cooler straight away.

Eventually, your clothing will get soaked from sweat anyway. But by starting early, you’ll feel cooler from the start. Just be aware that the pre-soaking method does not work in high humidity, but it’s simple and effective in hot, dry conditions. And don’t forget to lubricate your skin, because wet clothing can rub.

Triathlons
Duathlons
Running
Cycling
Or subscribe & save! And swap freely between all 900+ plans...
Learn More