How To Take an End Of Season Break: Triathlon, Cycling, Duathlon & Running. 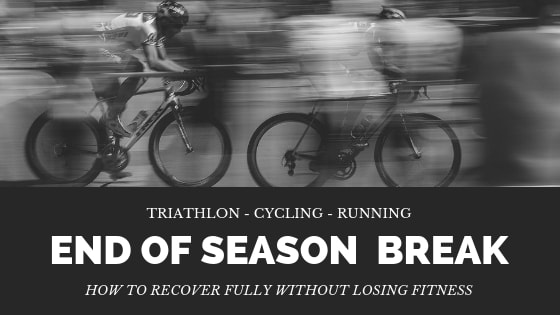 Are you a triathlete, cyclist, duathlete or runner? Here’s how to recover at the end of a tough season without losing fitness, putting on weight or getting bored.

​After a long season of training and racing, it’s important to take some downtime so your body can recover. Not only does your body need a break, but your mind does too.

Taking a break may actually make you a better and happier athlete. Those who take proper end-of-season breaks often stay in the sport for longer and therefore have a higher chance of reaching their potential.

Taking a break means easing back on your training and focusing more on the other aspects of life for a while. Such as your family, friends or career. The problem is, “taking it easy” doesn’t  naturally to endurance athletes.

For example, you might feel guilty about taking days off. Or worry that you’ll lose your hard-earned fitness and put on weight. Or slip back into a sedentary life and never get started again.

It’s not the case though. And in this blog, I’ll explain the best way to take an end of season break so you don’t lose fitness or motivation.

The method I use was inspired by an interview I did with the triple World Champion triathlete Spencer Smith. He told me that after his last race of the season he would take one week of complete rest, with no training whatsoever. He said he actually looked forward to it.

Then for the next three weeks, he’d only do light, unplanned exercise, but not necessarily swimming, cycling or running.

For you, that might include indoor rowing, stand up paddle-boarding, tennis, mountain biking or anything else that works up a sweat and doesn’t leave you feeling injured.

After that, he’d get back into his triathlon training, but only lightly for the first four to eight weeks. And here at MyProCoach, we follow a similar method for our end of season break.

How To Take Your End Of Season Break (In Three Phases)

After your last race of the season, take a week off. This is to break the habit of daily training and to let your body catch up on itself. If you really want to exercise during this period, you can go for some long walks.

After the first week of rest is over, you should then do three to seven weeks of unscheduled, unstructured light cardiovascular exercise. It doesn’t have to be running, cycling or swimming. Workout duration should be one hour or less, and done mainly at an easy intensity. Take two rest days per week during this phase.

We refer to this as ‘The Prep Phase’ in our longer structured training plans. Alternatively, I have designed a range of end-of-season fitness maintenance plans which will guide you through 8-12 weeks of structured, low-volume training.

Either way, this phase of training is designed to provide an easy, gradual return to proper training.  And is more about getting prepared to train, rather than preparing to race. You should stick with your sport, be it triathlon, cycling or running.

The weekly volume of Phase 3 is nearer half of what you might do later in the year. And most (not all) of the training is at an easy intensity.

Phase 3 is also a great time to try new things out. Like joining a new swimming club or riding online with Zwift. It means you can find out what works best for you, before the proper training starts.

The length of your Phase 3 depends on how many weeks you have until your target race. For example, if you have 40 weeks until your big event, you can enjoy 8 or 12 weeks of Phase 3 training. Whereas if your target race is in just 24 weeks, you should shorten it to more like 4-weeks.

Once you’ve finished Phase 3, you can return back to normal training again. From this point, you can ramp up the training volume gradually each month, so that your fitness keeps growing.

How Not To Get Fat During Your End Of Season Break

So that’s the three phases of recovery training covered. Now you just need to make sure you don’t get too fat during your break. After all you’ll be training less and probably socialising more.

It’s actually OK to gain a few pounds during the recovery period. It’s a great opportunity to dedicate time to family and friends, rather than focusing on your sport. So a small amount of weight gain is fine, because it’s easy enough to lose it once you’re back to full training.

That said, you still need to be a little careful. The more weight you gain, the longer it’ll take to lose it. So two or three pounds is OK, but try not to gain more. You don’t want the focus of all your winter training to be weight loss.

The secret is to roughly match your calorie intake with your activity levels. That means consuming less on the days you’re not exercising. Easier said than done perhaps, but it’s the only way.

For example, a 40-minute run might burn 400-600 calories. That’s the equivalent of a big snack or maybe three beers.

Whereas to gain a pound in weight you would have to consume 3500 calories, on top of your normal “weight maintenance” calorie intake. Over any time period.

So if you’re not exercising, but you’re still having that big snack or those beers each day, you’ll gain about one pound of body fat every single week. And you don’t want that.

Staying Happy During Your End Of Season Break

Aside from tailoring your diet and training during your end of season break, you should consider your mental well-being too. When you’re accustomed to training most days, stopping or cutting down can leave a temporary void in your life.

The secret is to be proactive about your extra time. Make a list of all the things you’d enjoy doing if you weren’t always training. Examples might include catching up with friends, going to a concert or taking your kids to a theme park. And then simply arrange to do them while you have the opportunity.

If you’re really struggling for ideas, you could use your spare time to service your bike, or research and enter races for next season.

Just remember, I’m only recommending one week of zero training, so the void shouldn’t be that big. Rather think of it as a precious opportunity to do all the things you can’t normally fit in.