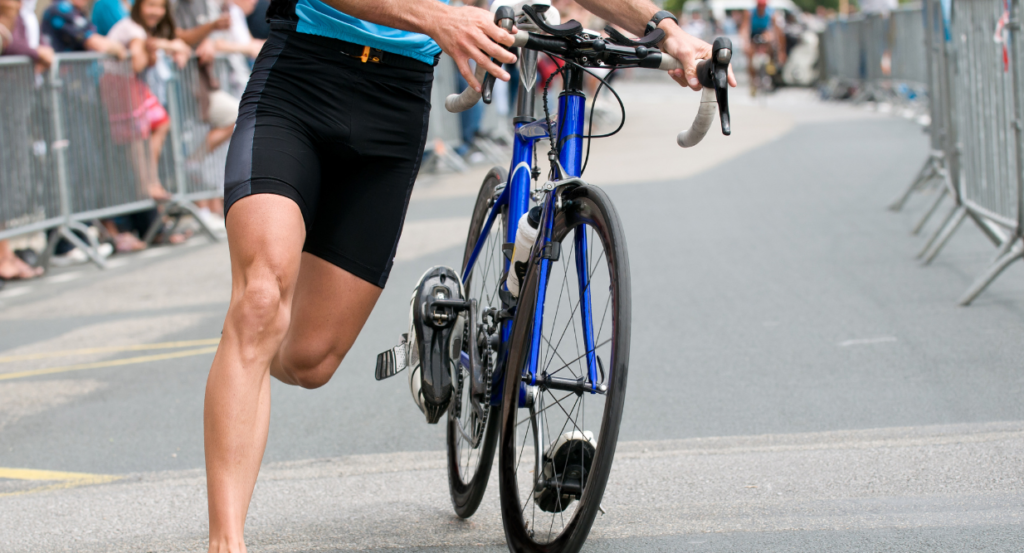 Looking to race a sprint triathlon? These are the times you should be aiming for…

One of the most appealing aspects of triathlon is the variety of distances on offer. There’s the behemoth that is IRONMAN (3.8km swim, 180km bike, 42.2km run). You have Olympic-distance, which as you’ve probably guessed, athletes cover at the Olympics. This comes in at 1.5km swim, 40km bike and 10km run. And then you have the one that nearly every triathlete has completed at some point on their triathlon journey – the sprint (750m swim, 20km bike, 5km run). This is what we’ll focus on today, specifically a good finishing time for you to aim for…

In fact, before we begin, a caveat. While I’ve mentioned three main distances, there are myriad distances in-between and, when it comes to the sprint, often the swim will come in at 400m. But for the purposes of the here and now, we’ll stick with the most common sprint that begins with the 750m swim.

Let’s start at the most extreme end of this sprint-finishing prediction and reflect on what the super (wo)men can do, namely the world’s best elites. In the truncated 2020 triathlon season, the ETU Sprint Triathlon European Cup took place in Barcelona at the end of October. In the men’s race, IRONMAN 70.3 record holder Kristian Blummenfelt, from Norway, edged out the experienced Javier Gomez in a winning time of 53:53 mins, broken down as a 9:42 min swim, 26:47 min bike and 15:32 min run with swift transitions in-between. For the women, France’s Mathilde Gautier claimed victory in 1:00:43, by a millisecond over Anna Godoy Contreras, who incredibly recorded the identical time. Gautier’s whisker-winning victory came thanks to a 10:39 min swim, 30:14 min bike and 17:56 min run.

Those times of 53:53 mins and 1:00:43 are crazy. But unrealistic for age-groupers. So what’s a good time for us recreational athletes? This is where we need to do some digging…

One of the most popular sprint-distance races in the United Kingdom is the Eton Sprints. It attracts thousands each year and its home of Dorney Lake hosted the 2012 Olympic rowing regatta. Ages and abilities are across the board so it’s a solid benchmark to calculate a good average time. And the simplest way to do this is by taking the median of the men’s and women’s results, respectively.

Of course, there are numerous variables that might make the average sprint finisher time faster or slower than this time. This is an enormous feature in its own right but as a snapshot…

When it comes to the swim, anything under the 20-minute mark is pretty good. If you’re hitting 15 mins or faster, that’s very good. You’ll find that sea swims are often slower, especially if the waves are up. River swims, if you enjoy a favourable current, can be faster. Wetsuits naturally add buoyancy and are particularly beneficial to the weaker swimmer. Just make sure you secure the correct fit.

Around 40 mins for the 20km bike means an average speed of around 30km/hr (or 18.6mph). That’s pretty fast but not unachievable. Key simple improvements are having a professional bike fit and wearing a form-fitting tri-suit for improved aerodynamics. If you enjoy the luxury of a downwind course, you’re laughing. If it’s hilly, you’re not!

If you can finish with a sub-30-minute 5km run, you’ll edge closer to breaking 1:30 hrs for sprint-distance, which is a common target for many triathletes. This is where brick training’s essential as running off the bike’s a different prospect to running fresh. So a weekly bike-run session in at least the final two months pre-race is a good start. Another guaranteed saver is elastic triathlon laces.

There are reasons you don’t see a 50-year-old draping an Olympic medal over their shoulders. Despite the ambition and hunger, a natural drop in hormones like testosterone (men) and oestrogen (women) leads to muscle loss – especially fast-twitch fibres – meaning a drop in speed. However, for both genders, it’s been shown that weight training minimizes the loss of both. This is useful training for all triathletes but especially the over-40s. Increasing protein intake helps, too.

So, now you have a goal time that you can write on a Post-It note and stick to your fridge door, all that’s left is to get out there and train. Happy goal-getting

Triathlons
Duathlons
Running
Cycling
Or subscribe & save! And swap freely between all 900+ plans...
Learn More