Should You Train When You’re Sick? 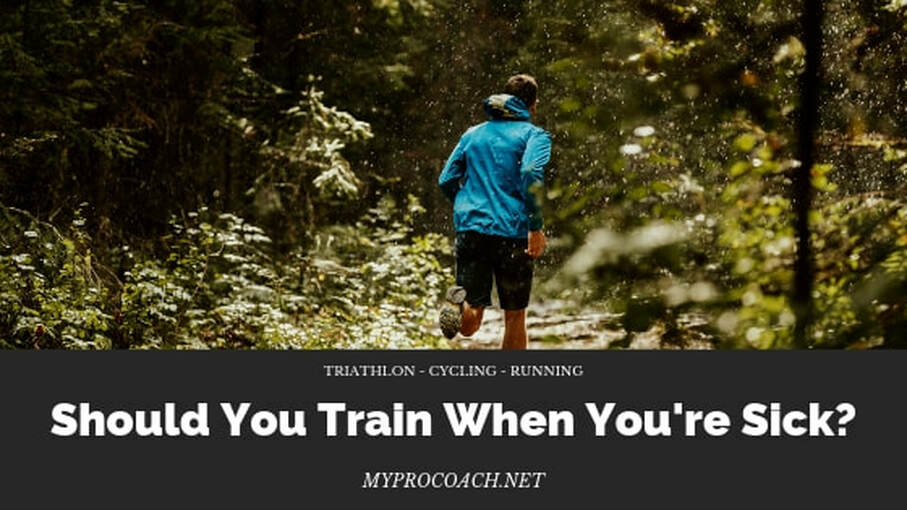 Will swimming, cycling and running cure you or make the symptoms worse?

According to the National Health Service in the UK, you’re 80% more likely to be struck down with a cold in winter compared to the rest of the year. But should that sniffle, dribble and whine really strike you down or can you continue to train, whatever your endurance sport of choice, be it running, triathlon, cycling, swimming or duathlon?

First up, a paradox. One of the many benefits of training is strengthening your immune system. Moderate training’s been shown to stimulate the production of a white blood cell named TH1. Unlike red blood cells whose endurance attributes are carrying and delivering oxygen to working muscles, white blood cells like TH1 are charged with killing bad bacteria and viruses.

The paradox is that there’s an immune tipping point. Push the intensity and that peak protection descends into a downward spiral where you’re more susceptible to infection. So if you’re displaying cold and feverish symptoms, you should definitely not undertake intervals, fartleks or hill sessions.

Does that mean you can train at a lower intensity? Perhaps. Perhaps not. Ultimately, this one is down to you and experience as we don’t want to insist you train and you become worse. Only you know exactly how you feel but, as a broad principle, you can fall back on the proven – namely, are your symptoms above or below your neck?

If you have a dripping nose or heavy head, you can continue to train lightly. However, we’d recommend cycling over running or swimming. The higher impact of running, causing micro muscle tears and a catalogue of hormonal changes, is arguably a naturally more intense activity than cycling, so not ideal when unwell.

While swimming pools, despite chlorine’s best efforts, can take over an hour to kill some germs – not ideal when you’re already feeling low.

To really hammer home the infection-fighting potential of cycling, we’d recommend an indoor turbo-trainer session above riding outdoors in sub-zero temperatures, especially if you’re prone to head colds developing into chest infections. (That said, it’s not actually the cold air making things worse – it’s a lack of water content in the cold air that can cause further issues.) Just have a fan to hand and keep the intensity low.

If your symptoms are below the neck – we’re talking coughing, nausea, shortness of breath – do not train. They can be a sign of a more serious infection so you should rest up completely. Normally, two or three days will repair and recuperate. If it doesn’t, give your doctor a call.

If you feel the above-and-below neck protocol is too parochial, you can always tap into data. You see, your resting heart rate is an accurate gauge of wellness. Simply take your heart rate first thing after awakening and if, for instance, your norm is 50 bpm and it’s shot up to 80 bpm, that’s a clear sign your body is working harder to battle some invader.

Many heart rate monitors, like Polar’s new Vantage V and Garmin’s Forerunner 935, also provide training status to measure whether overreaching is verging on overtraining. The more you train, the more accurate a picture these things paint. If you use Training Peaks, you can record metrics like sleep, tiredness and resting heart rate, to help you track changes over time.

Then there’s heart-rate variability, or HRV, training. HRV is essentially the time interval between heart beats and is a gauge of your nervous system. It can be measured via a chest strap from HRV flag-bearers Omegawave or credible apps, like HRV4 training, that detect changes in blood volume by placing your finger on your smartphone.

‘The idea is that small variations in the beat-to-beat timing of the heart reflect the body’s level of stress,’ founder of HRV training tool ithlete Simon Wegerif tells us. ‘Each person has a characteristic amount of variation when they’re well recovered, and the variation decreases when they are stressed. A daily morning reading is compared to their own baseline and used to determine how recovered they are.’

So if you wake up one morning and your HRV is very low – a sign of stress and potential overtraining – and you planned a high-intensity session, you may decide to do a recovery session instead. And vice versa. ‘The great thing about HRV training is that it considers myriad factors that affect stress,’ continues Wegerif. ‘This includes sleep quality, fuelling status and even jet-lag.’

You should now have an idea of when and when not to train. But what about accelerating your recovery to health and full training? Over to two pro-cycling doctors who are used to dealing with athletes who constantly two the line between peak performance and illness: Dr Rob Childs, who’s worked with Katusha and Dimension Data, and current Sunweb doctor Anko Boelens…

‘When I was working with Katusha, one of my proudest achievements was finishing a GrandTour with a full pack of riders,’ says Childs. ‘And that was heavily due to favouring garlic over painkillers. Why – is down to its anti-inflammatory nature, rather than painkillers that while masking the pain lengthen a fully healed return to health.’

Garlic’s also the perfect food to stink out sickness thanks to an antimicrobial compound called ‘allicin’ with one UK study suggesting people taking allicin supplements suffered 46% fewer colds and recovered faster than the individuals who went without. Recipes involving garlic are endless but adding a few cloves to traditionals like Bolognese and curry not only boosts immunity but adds taste, too.

‘If someone’s feeling unwell, we’d give the rider multi-vitamins, fish oil and zinc,’ adds Boelens. ‘It’s no magic cure but it’ll strengthen their immune system. Hopefully, a good hygiene protocol should prevent these things in the first place…’ That hygiene protocol, says Boelens, can seem a touch anti-social as it means no hand-shaking and no physical contact. Less intrusive is hand sanitiser, made famous by Team Sky.

‘We heavily cut down on infections once we introduced hand sanitiser,’ former Team Sky doctor Dr Richard Freeman wrote in his book ‘The Line: Where Sport and Medicine Collide. (Freeman will be dominating the news columns shortly – a tribunal starts on 6th February alleging he knowingly ordered testosterone to dope a rider). ‘You’re just as likely to get an upper respiratory tract infection or gastroenteritis from shaking hands with somebody who’s infected, as being sneezed on or eating food prepared by the person who’s infected… Whenever I saw anybody who looked even slightly unwell, they were either asked to stay away or I gave them one of the small travel-sized bottles of sanitiser I used to carry around with me.’

Freeman’s focus on hygiene also saw introduce a toilet-lid policy. ‘If there’s infection in the toilet, which is highly likely, and you flush it with the lid open, you create an aerosol effect,’ wrote Freeman, ‘so even if you’ve exited the bathroom or cubicle by the time that happens, you risk getting it on your toothbrush, so the next time you brush your teeth, you can pick up an infection.’

Other preventative ideas we’d suggest include avoiding training while in a fasted state. Insufficient carbohydrate intake increases levels of the stress hormone cortisol, which knocks your immune system; an immune-boosting vitamin-D supplement through winter when you don’t receive enough sun to stimulate high levels of your own; and a healthy beta-carotene intake, which your body converts into vitamin A and, again, strengthens your immune system. Carrots, pumpkins and egg yolks are good sources.

Of course, this is textbook advice. The problem is, as endurance athletes, we can convince ourselves we’re either bulletproof or we’ll never reach our targets if we miss a session, let alone a week.

But when it comes to illness, you must give your ego a rest. Train smart and the finish line will arrive that bit quicker.

GET STARTED
Close Popup
The longer plans start easier and progress more gradually. This has a bearing on the difficulty level you choose. For example, a 12-week plan starts off at a higher level than a 36-week plan because with 12 weeks left there’s not as much opportunity to build up slowly.
Our Standard and Masters plans are designed to get you ready for your target event, while our Off-Season plans allow you to recover from a tough season but still maintain your well-earned fitness.
This table provides a brief overview of which level might be right for you, to help you get the most out of your plan. You should also note your current fitness levels and how many times you have done this event before.
All our plans are available for sale directly on the TrainingPeaks Store, or you can subscribe as a MyProCoach Unlimited Athlete to be able to swap freely between all of them, among other benefits.
We're Sorry To See You Go!