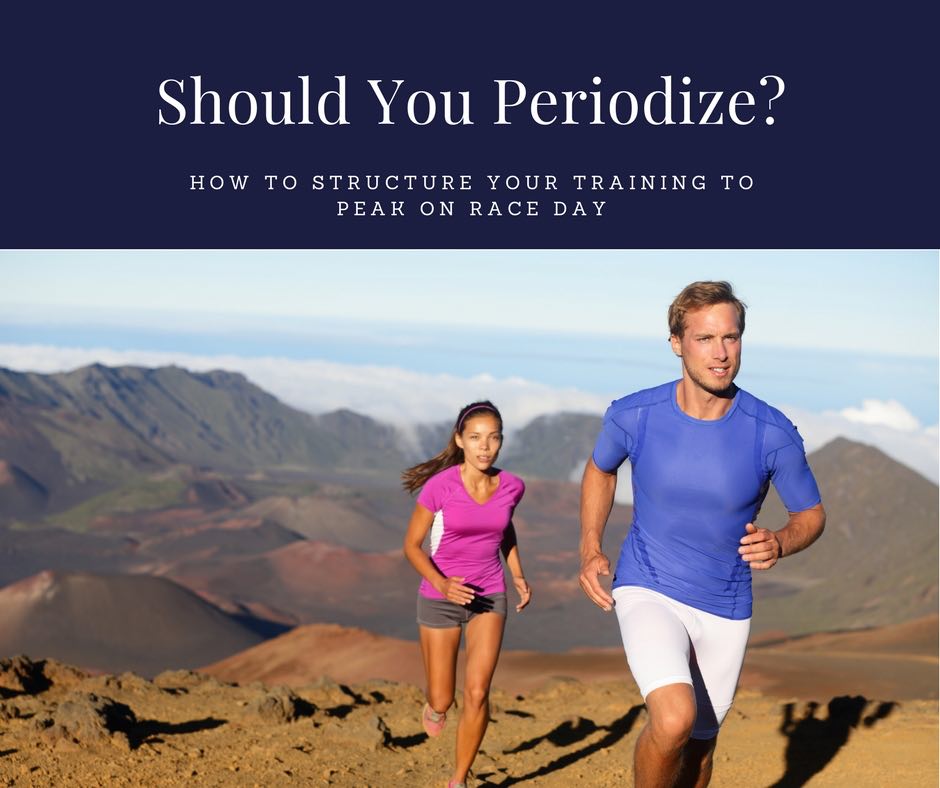 An Essential Guide on How To Periodize Your Training

Quick question.  Do you know what training you’ll be doing tomorrow? Yes? But do you also know what training you’ll be doing in five months time? I imagine your answer is “no” and you’re not alone here. While five months may seem a long way off, it’s important to ensure that every training session you do is part of a grand plan. Without planning ahead, you’re unlikely to find the right blend of intensity, volume, recovery and progression that you need to reach your peak on race day.

In coaching terms, it’s called micro-planning and macro-planning. The micro bit is all about planning the next few days in detail. And the macro part involves thinking longer-term and planning ahead. That’s what periodization is about – macro-planning.

The beauty of macro-planning is that you can divide your training year into several chunks. During these chunks, you can focus on improving different aspects of your fitness, rather than trying to do everything at once. It’s known as periodisation and it applies to triathlon, duathlon, cycling, running and pretty much any sport.

Periodisation is the first thing I think about when I design a training plan for an athlete. It’s the foundation upon which everything else is built. I use a similar triathlon periodisation model set out by Joe Friel in his Training Bible books. This involves breaking your season down into six distinct phases.

The purpose of this blog is to help you understand those six distinct phases so that you can successfully apply them to your own training:

This is where everything begins. This period is all about preparing your body and mind for regular training. It should typically last around 4-weeks. During this time your aim is to get up off the couch and start building some training momentum. You don’t need to train too hard yet, but you do need to start racking up consistent regular workouts. It’s also a good time to try new things out, like different routes, training groups or new equipment. I call this the “guilt-free” training phase because if you have to miss a few sessions it’s not the end of the world.

Once you’ve done a month of prep training, it’s time to move on to the next phase. The Base period has been described as being like an Egyptian pyramid: The broader the base of the pyramid, the higher the peak that can be built on it. The focus here is on endurance training at low intensities as well as “speed skill” sessions involving just a few short high-intensity efforts. After four weeks you should also include some muscular endurance workouts, consisting of long efforts (5-20 mins) at around 1-hour race pace, with relatively short recovery periods. During the base phase, you can focus on increasing your general fitness, without the constant interruption of regular races.

– Typically 8-weeks, for example, May and June

After 8-16 weeks of Base training, it’s time to move on to the Build Phase. During this time your workouts become more race-specific and less general. Don’t worry about your weekly volume (hours or distance per week) at this stage, focus more on what you do specifically in a few key workouts. For example, sessions that in some way mimic your target race. Of course, you needn’t make every single session race-specific, otherwise, you’ll be permanently exhausted. It’s also a good idea to include some lower-priority races into the Build phase, to freshen up your race skills and confidence.

This phase starts at around three weeks before your biggest race or races. The aim is to get the right mix of intensity and rest to produce race-readiness at the right time. It involves doing race simulations every third or fourth day (for example longer workouts or race-pace intervals), with rest or easy sessions in between. These key workouts should gradually get shorter as you progress through the first week or two. On the days between your race-simulation sessions, you should rest or train at low intensities and these workouts should also get shorter as the Peak period progresses.

This involves the last 6 or 7 days before your big race. The main aims are to maintain your fitness, eliminate any traces of fatigue and prepare mentally. Every athlete has their own way of tapering for a race, but research suggests that you should reduce the training volume and frequency, but not necessarily your intensity. I usually recommend at least one day off in the Race Phase, if not two.

Typically 2-12 weeks, halfway through the race season or at the end.
This phase usually starts after your last big race of a macro-cycle.

After training for a race or following a training program, it’s important to get some rest from the demands of structured training. That’s not to say you should stop altogether, but your emphasis should be on staying fit and healthy, rather than growing your fitness. That is until you start the next macro-cycle with a Prep or Base Phase.

Periodization will help you do the right training at the right times of the year. However, not all training plans have all six phases outlined above. Sometimes it’s not possible to fit all six into a short space of time.

For example, if you train for just 8-weeks, you might only have time for the Build, Prep and Race Phases. There’s nothing wrong with that, you’ll still make some great progress in that time.

That said, you might get even fitter by training for a full macrocycle of (say) 24 weeks. Either way, breaking your training into several phases is a great way of ensuring you peak at the right time for your target event.

If you’re interested in following my training plans (which include coach support), you can learn more here.