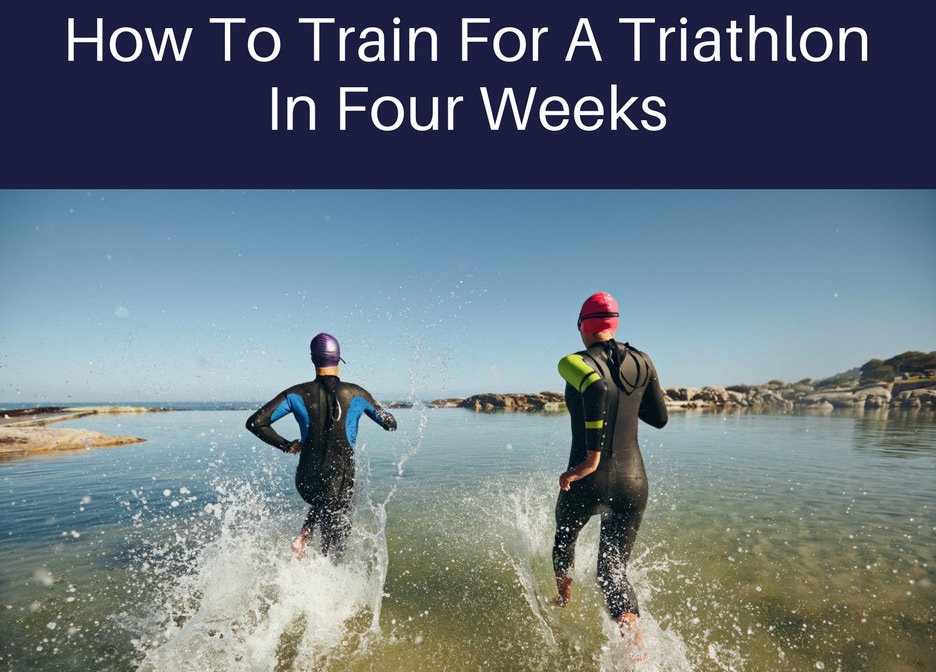 Get triathlon fit in less than a month with this essential last-minute training plan and guide.

Is it really possible to get fit for a triathlon in just four weeks? If you’re already an active person, then the answer is yes.

When I say “active” I mean that you already do some form of regular cardiovascular exercise. For instance gym classes, swimming, cycling or running. You don’t need to be an athlete yet, just not a complete couch potato.

Not only will you need to get fit in four weeks, but you’ll need to learn some essential race skills too. Examples include running off the bike, swimming in open water and practising your transitions.

In this blog, I’ll not only provide you with a free 4-week triathlon training plan but I’ll also give you advice on all these elements to help you get race-ready.

Unless you’re already a swimmer, this discipline will be your biggest challenge in a triathlon. If you can’t already swim 400 metres or yards non-stop you’ll need to take drastic action now, otherwise, you’ll struggle on race day.

With just four weeks to go, the best advice is to sign up for a series of adult swim lessons. Aim for two lessons per week up until race day. Avoid the temptation to save money by “going it alone” and training solo. You’ll never learn good technique in four weeks by swimming alone. Swimming is 60% technique and 40% fitness. Think of adult improver swim lessons as a lifelong investment in yourself.

After two or three weeks of building your swim confidence, it’s time for you to try an open water swim. In most cases, you’ll need a wetsuit, unless the water temperature is above 24 degrees Celcius (75F). The water should also be above 14 degrees Celcius (57F) too, otherwise, you’ll suffer from the cold – even with a wetsuit.

The great thing about using a swim wetsuit is that it provides you with some buoyancy, so it’s actually easier than swimming in a pool. The only thing that makes it hard is the conditions – other people, current, waves and poor visibility.

In the free triathlon training plan at the end of this blog, I’ve scheduled a couple of open water swims for you to try. Make sure you always swim with others in a safe environment, be it in the sea or a lake that allows open water swimming. The main aim of these open water workouts is to get used to the conditions. So you don’t need to swim big distances, rather just have a 10 or 15-minute dip to build your confidence.

Brick sessions involve cycling – then running straight afterwards. With just four weeks to train, these workouts are a great way of increasing your fitness and confidence before a race, in a time-efficient way. I’ve included some in the free triathlon training plan at the end of this blog.

Research suggests that it’s the first five minutes of running after cycling that are the most stressful for your body. For this reason, keep your brick sessions relatively short, to help your body adapt to those first five minutes. Brick sessions are also a good opportunity to practice your transitions, such as putting your running shoes on quickly.

Transitions are the parts of a triathlon where you go from one discipline to the next. Rehearsing them will increase your confidence and reduce the likelihood of making mistakes.

To rehearse your transitions, start by leaning your bike against a wall, alongside your bike shoes, run shoes, helmet and anything else you think you’ll need for your race.

Practice your first transition (known as T1) by running to your bike, putting your helmet and bike shoes on, jogging about 10m with your bike, then mounting and riding it. Do this several times, so it becomes second nature.

Then do the opposite to practice the second transition (T2). Ride towards your pretend transition area. Stop about 10 metres before it, dismount, jog to your transition, place your bike against the wall, remove your helmet and cycle shoes before slipping your running shoes on and jogging away.

Remember, the less stuff you have in transition the better. Every additional item creates a time cost and increases your chances of making a mistake. So keep it simple.

With just four weeks to go before your triathlon, every day is crucial and you’ll need to be organised in advance. You can’t afford to miss sessions because your bike doesn’t work or because your local pool is closed for renovations.

Get yourself a calendar and plan the next 28 days in advance, whether it’s a pool session, an open water swim or a run.

Do your research and don’t leave anything to the last minute. For example, if you’re planning to do an open water swim in two weeks time, you need to arrange a venue and find some people to swim with. You should have a wetsuit that fits you, goggles that work and a brightly coloured swim hat for safety.

If you leave these kinds of tasks to the last minute, you’ll increase the chances of “bad luck” getting in your way.

Similarly, you need to get your kit ready. The most important single item is your bike. Save yourself time upfront by getting your bike serviced by a good bike shop. Tell them you’re racing a triathlon in four weeks and that you need it to train on now. Find a shop that sells high-end road bikes, as they’re more likely to have experience servicing people’s bikes before races.

If you’re worried about your fitness ahead of a triathlon, sensible pacing could be your saviour. Triathlons are far easier if you don’t start off too fast – and yet almost everyone makes this mistake.

In fact, the hardest part of a triathlon has been shown to be the first transition, when you’re running towards your bike after completing the swim. This is typically when your heart rate will be at its highest, although there’s no great advantage to sprinting through transitions in most events.

The secret of race pacing is to treat each discipline as a small part of one big race, rather than three separate races. So don’t aim to set a personal record on the swim, bike and run. Instead, think about the whole thing as one long event lasting anything from 1 hour to 1 hour 30 and pace yourself accordingly. You wouldn’t sprint in a half marathon right? The same applies to a sprint triathlon.

Unless you’re an advanced triathlete, you should aim to race at around 85-87% of your maximum heart rate during a sprint triathlon. In terms of perceived exertion, that would be around 15 or 16 out of 20 on a hardness scale. Let’s call it “moderately hard”.

For a relatively short triathlon like a sprint, you don’t need to worry too much about consuming nutrition during the event. Providing you eat a normal-sized carbohydrate-based supper the night before (e.g pasta and sauce) and a light carbohydrate breakfast a few hours beforehand (e.g cereal or toast) you should have enough energy to last for the entire race. That said, sipping an energy drink or an energy gel won’t do you any harm.

You should also be careful about dieting in the lead up to a race. If you’re training most days, you’ll need plenty of food energy to keep you going. Your body can’t recover from training if it’s not getting sufficient nutrients and energy from your daily diet.

This free training plan is written as a bare-minimum “get round” triathlon training guide, rather than a high-performance plan. It uses simple language, without too many different training zones or fancy terminology.

If you already have some triathlon fitness you could always extend the sessions to suit your level.

If you’re really struggling with the training, break the workouts into smaller parts, with frequent short rest periods. If you feel like you’re constantly cranky and tired, take two or three days off to recover.

There are two different training intensities in this training plan: Hard and easy.

– You can do the bike rides on an indoor trainer or outside, it’s your choice. Some of the bike workouts can be substituted for a spinning class.

– Do the swim sessions using a front crawl or freestyle stroke (FC).

– Run on soft ground if possible (grass or trails) to reduce the impact.

Sunday
Run or run/walk 20 mins at an easy pace

Run or run/walk 20 mins at an easy pace

Sunday
15-20 minute Open Water Swim. Just get in the water, swim around and get a feel for it. Practice your swim starts and exits, pretending you’re in a triathlon.

Thursday
Run 20 mins at an easy pace, but include a 3-minute hard effort

Friday
Ride 30 mins at an easy pace, but include a 5-minute hard effort

How much time between triathlon races do you need? This guide explains how to recover, train and race, when you have multiple events. You can